Showing posts from February 2, 2014
Show all
February 08, 2014
International titbitsPosted on February 8, 2014 by sagarmedia Kishida,Kerry confirm collaboration on East Asia
Kishida, Kerry confirm collaboration on East Asia
Japanese Foreign Minister Fumio Kishida and US Secretary of State John Kerry have confirmed that their countries will work closely together in maintaining stability in East Asia.

The officials met in Washington on Friday. Kishida had requested the visit.

The 2 officials confirmed closer security cooperation between Japan and the US to maintain stability in the Asia-Pacific region.

Kerry stressed the importance of collaboration among Japan, the US, and South Korea in responding to North Korea.

Kishida told reporters after the meeting that he was assured that t…
Post a Comment
Read more
February 07, 2014

Protesters throw stones at police in front of a local government building in the northern Bosnian town of Tuzla, on February 6, 2014.
Police in Bosnian capital Sarajevo have launched stun grenades and rubber bullets at angry demonstrators, Reuters reports. Several cities in the Balkan state are gripped by dissent after a local unemployment demonstration grew into a nationwide protest.
The protests originated in the northern town of Tuzla, where workers on Wednesday took to the streets angry at the closure of factories sold off by the state. On Friday, an angry rally set fire to a local government building there, a Reuters photographer said.
During the days of violence, over 130 people got injured, around one hundred of police officers among them.
Anti-government demonstrations in Tuzla, Bosnia resulted in over 130 people – including 104 police officers – reporting injuries as protests o…
Post a Comment
Read more
February 07, 2014

Beserk at Jan-Lokpal billPosted on February 7, 2014 by sagarmedia Jan Lokpal Bill by Delhi Govt unconstitutional: SG tells LG7022014
Beserk reports of media put Janlokpal at center of controversy for each political group wants to take mileage out of its color. Indian Lokpal when initiated by the system with its appointment and working thus lose sheen of Ombudsman who has not to be related with the Administration while in office and thus the PM,LOP or Guv nod to appointment of ombudsman or its council is just  making mockery of the Lokpal because the constitution of India does not provide any format for its structure to grow as part of constitution,lokpal is elected outside its scope to observe whether the  constitution if followed in its spirit or making individuals powerful themselves in name of constitution. Even in its name, naive in reign, his thirty days of misrule but call himself the tiger when his term is not defined for a day or week. In this backdrop when peopl…
Post a Comment
Read more
February 07, 2014

His appointment was recommended by Princeton President Christopher L Eisgruber and approved by the Board of Trustees at their January 25 meeting, the statement said.

He succeeds William Russel, who has served as dean since 2002 and who announced in September that he would step down this year.

"Sanjeev Kulkarni will be a spectacular dean for Princeton's Graduate School," Eisgruber was quoted…
Post a Comment
Read more
February 06, 2014

UK Autmotive: An expertise Seminar for Investment in UK6022014


9:15 PM – 5 Feb 2014
014 @anandmahindrapic.twitter.com/lbzSKo77ic
About these ads Occasionally, some of your visitors may see an advertisement here.
Tell me more | Dismiss this message
Post a Comment
Read more
February 05, 2014
Kofi Annan to travel to India on high level visit from 5 – 9 February 20145022014
Geneva Kofi Annan, founding chair of the Kofi Annan Foundation, Nobel Peace Prize laureate and former Secretary General of the United Nations, will today travel to India to deliver the inaugural address at the 14th Delhi Sustainable Development Summit. Mr Annan will also meet the Prime Minister of India, Manmohan Singh, to exchange views on political and economic developments in the region, climate change and opportunities for south – south cooperation.
Ӊndia plays a key role in addressing some of the worldⳠbiggest challenges such as peace and stability, poverty alleviation and climate change䠋ofi Annan said. ㉮dia itself is amongst the countries most affected by climate change as various droughts and floods have shown. Its leadership, within the region and globally will be essential to tackle these challenges.伯span>
Mr Annan will then travel to Bangalore and, as Chief Guest at the Infosys Prize ceremon…
Post a Comment
Read more
February 04, 2014

Delhi cabinet clears Jan Lokpal Bill
Updated on : 04-02-2014 03:13 AM Delhi Cabinet on Monday cleared the draft of the much talked-about Jan Lokpal bill which provides for covering all public servants - from chief minister to Group D employees -- and seeks life term as maximum punishment for those found guilty of corruption.


The bill provides for a legal right of protection to honest officials, whistleblowers and witnesses besides having provisions for time-bound investigation and trial of corruption cases.

The draft bill was cleared at a cabinet meeting presided over by Chief Minister Arvind Kejriwal in New Delhi on Monday.

Bringing the Jan Lokpal bill to contain corruption was a key election promise made to the voters by AAP.

PWD Minister Manish Sisodia said no provision for any "special privileges" for even the chief minister and council of ministers has been proposed in the bill when it comes to cracking down on corruption.

We all know that we cross a major landmark in life when we turn 18 years old. You are bestowed upon with many privileges – you get a license to drive, can rightfully enter a disco and even choose your life partner! But what about the fundamental privilege of the right to VOTE? How many of us exercise this?

A government by the people, for the people just can’t work without its people. With the thought of mobilizing the youth and taking its’ Nayi Soch agenda forward, STAR PLUS has introduced an initiative to encourage first time voters to register for the upcoming General Elections. Led by its  popular face & youth icon – Veera. The campaign will see a series of public service messages, prompting young viewers to register, vote and make a difference.

"In India, the number of potential first time voters during this election…
Post a Comment
Read more
February 03, 2014 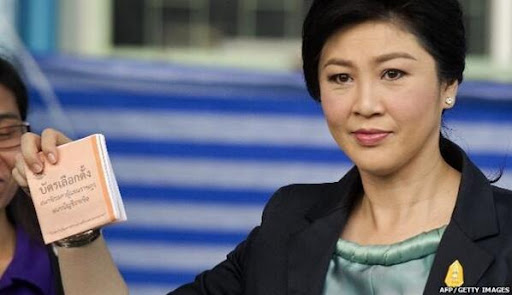 Clash on eve of Thai polls2022014 Thai PM Yingluck Shinawatra voted soon after polls opened in #Bangkok At Thai capital on the eve of disputed snap polls as shots were fired during a clash between pro-government supporters and opposition activists determined to scuttle the election as crowds of demonstrators they are blocking access to would-be votersin national capital.
Several shots and a minor explosion were heard as the clash broke out despite tight security measures put in place for Sunday’s vote, including the deployment of over 2,00,000 security personnel. At least three persons were injured in the firing, while others in the Lak Si area ran for shelter in a nearby mall, Bangkok Post reported.
Protesters marched in Bangkok and laid siege to a building where ballots were stored in a final bid to disrupt the polls and stop beleaguered premier Yingluck Shinawatra from returning to power.
Police and army personnel will provide security at more than 93,000 polling statio…
Post a Comment
Read more
February 02, 2014
RITHVIK-ASHA TAKE HOME THE TROPHY OF NACH BALIYE 6 Mumbai, February 1st ‘2014:The temperature was soaring high, the stage was set and celebrity couples ready to come forward and take home the Trophy of Nach Baliye-6. After three months of nonstop dancing and entertaining the viewers, RITHVIK-ASHA took the golden trophy home. The couple that was pitted against three other strong contenders, Gurmeet-Debina, Vinod-Raksha and - Ripu-Shivangi won the finale with majority votes. The duo had tirelessly worked on their chemistry, performances & grooming through the Nach journey to impress the judges’ trio of Shilpa Shetty Kundra, Sajid Khan, Terence Lewis and the viewers week on week. The Grand Finale saw some outstanding performances from the celebrity couples and never seen before acts by judges - Terrence Lewis put on a saucy act on Lahu Mu Lag Gaya while Shilpa Shetty Kundra for the first time performed an aerial act and grooved to Ram Leela. The stage also marked the first ever televi…
Post a Comment
Read more
More posts