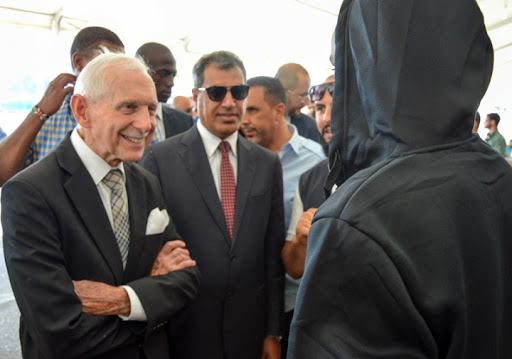 LIBYA REMAINS TOP PRIORITY FOR UN MIGRATION AGENCY: DG SWING IN TRIPOLIAUGUST 5, 2017LEAVE A COMMENTON LIBYA REMAINS TOP PRIORITY FOR UN MIGRATION AGENCY: DG SWING IN TRIPOLI Themes: Humanitarian Emergencies Tripoli – IOM, the UN Migration Agency’s Director General William Lacy Swing returned to Tripoli earlier this week (1-3/08), where he reiterated that Libya remains IOM’s top priority. In what was his second visit to Libya this year, Director General Swing along with Vincent Houver, IOM Deputy Director of the Department of Operations and Emergencies, Othman Belbeisi, IOM Chief of Mission in Libya and other IOM Libya staff met with the Prime Minister Fayez al Serraj. The IOM delegation also met with several Government ministers, as well as representatives of the Libyan Coast Guard and the Directorate for Combatting Illegal Migration (DCIM). “Libya remains IOM’s top priority and it is therefore important for me to be back in Tripoli so soon after my last visit at the end of March,” sa…
Post a Comment
Read more
August 04, 2017

THE TOP 10 MOST PROMISING DESTINATIONS FOR SUN LOVERSAUGUST 3, 2017LEAVE A COMMENTON THE TOP 10 MOST PROMISING DESTINATIONS FOR SUN LOVERS Malta, Costa Rica, and Cyprus spoil expats with sunshine, while those moving to the United Kingdom, Ireland, and the Netherlands should not forget their umbrellas Countries such as Cyprus, Greece, Brazil, and Portugal can offer great weather, but are often rated poorly in terms of working abroad.The weather in the UK and Ireland is rated the worst in the world by far: six out of ten expats there were not looking forward to the climate in their new home.Good weather seems to also affect people’s happiness: the vast majority of expats in Malta (90%), Costa Rica (92%), and Cyprus (81%) is happy with their life in general. Munich, 02 August 2017 — The weather seems to be play a crucial role in expat’s choice of destination: almost seven out of ten (67%) say the climate in their new home was a factor to consider before moving abroad. This means that peop…
Post a Comment
Read more
More posts