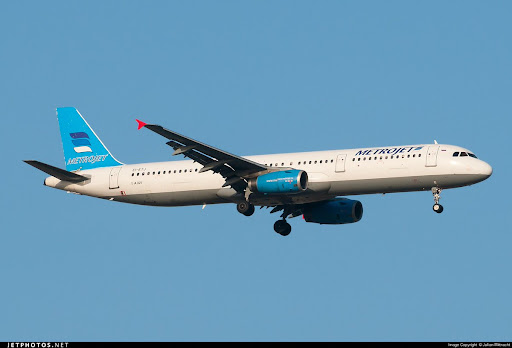 Russian passenger aircraft with 220 onboard crashesOCTOBER 31, 2015| EDIT BLACK BOXES REPORTEDLY FOUND AT PLANE CRASH SITE IN SINAI EI-ETJ is an Airbus A321 that belongs to airline Kogalymavia airline. The flight was traveling from the Egyptian resort to St. Petersburg. It belonged to the Kogalymavia airline, which also uses the brand name Metrojet, an operator popular among Russian tourists going to Egypt. The plane was supposed to contact air traffic in Turkish Cyprus’ Larnaca after leaving Egypt’s airspace, but failed to do so. A source at Sharm El-Sheikh Airport told RIA Novosti the pilot of the missing plane requested a change of course, saying the jet would have to land in Cairo. The source said the crew of the crashed plane had complained to the airport’s technical service that the jet had engine problems.Russian plane carrying over 220 people from Egypt to Russia disappeared from radars, and crashed in central Sinai, according to Russian and Egyptian authorities. Kolavia Fligh…
Post a Comment
Read more
October 30, 2015

SECOND EDITION OF RENDEZ-VOUS À ROLAND-GARROS IN INDIAOctober 29, 2015Leave a commentEdit French Tennis Federation & All India Tennis Association announces second edition of Rendez-Vous à Roland-Garros in India ·      Country’s top 16 U-18 boys and girls will vie for a wildcard entry at the French Open Junior ·      AITA to lay down two clay courts at Delhi Lawn Tennis Association as a part of a Cooperation agreement with FFT New Delhi, 29th October 2015: The French Tennis Federation (FFT), organizers of the world’s premier clay court event – Roland-Garros (aka The French Open), in association with All India Tennis Association (AITA) today announced the second Indian edition of Rendez-Vous à Roland-Garros in partnership with Longines. Returning for the second consecutive year, the tournament is aimed at promoting young talents and grass-roots clay-court tennis in India. The competition will be held at newly laid clay-courts at the Delhi Lawn Tennis Association from February 8thuntil 1…
Post a Comment
Read more
More posts