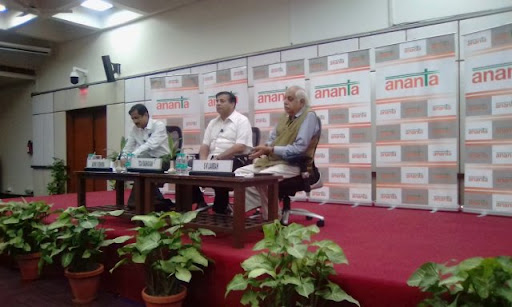 Pakistan Occupied Kashmir (PoK) receives lesser attention.ON SEPTEMBER 28, 2017 BY NARESH SAGARLEAVE A COMMENTEDIT Naresh Kumar Sagar In contrast to developments in Pakistan and India Pakistan relations, Pakistan Occupied Kashmir (PoK) receives relatively lesser attention. In the case of both its units – ‘Gilgit Baltistan’ and Ázad Kashmir’ India has however vital interests. Recent developments in India Pakistan relations, tensions on the LOC and finally, domestic developments in Pakistan itself have impacted this constituent part of Jammu and Kashmir in different ways further highlighting the anomalies of its juridical and constitutional status. The strategic dimensions of Pakistan Occupied Kashmir (PoK)as a whole are also changing with the qualitatively new interface that has developed between Pakistan and China in recent years. New Delhi, September 26th, 2017:Ananta Aspen Centre organized an interactive session on “Pakistan Occupied Kashmir and Cross Border Linkages” with Ambassador…
Post a Comment
Read more
September 25, 2017
Abe to dissolve the Lower House of the DietON SEPTEMBER 25, 2017 BY NARESH SAGARLEAVE A COMMENTEDIT Japanese Prime Minister Shinzo Abe  told senior members of his party that he’ll dissolve the Lower House of the Diet on Thursday, which will lead to a snap general election. Abe just met with Liberal Democratic Party executives.He told them he wants a public mandate on how to spend the expected revenue from a long-delayed consumption tax hike now scheduled for late 2019. The revenue is earmarked for social security for the elderly. But Abe wants to divert about 18 billion dollars to fund social security programs like childcare and education. He says that will benefit all generations. Abe’s decision to call an election comes as his cabinet has received an uptick of support in recent polls.The rate had plunged to its lowest level in July following a series of alleged influence-peddling scandals that dogged his cabinet for weeks. Abe wants to dissolve the Lower House as it reconvenes witho…
Post a Comment
Read more
September 25, 2017
PM Modi to launch ‘Power for all’ schemeON SEPTEMBER 25, 2017 BY NARESH SAGARLEAVE A COMMENTEDIT Prime Minister Narendra Modi will launch ‘Power for all’ scheme today to mark the birth anniversary of Pandit Deendayal Upadhyaya. Official sources said that the scheme will be named ‘Saubhagya’ and will provide subsidy on equipment like transformers, meters and wires. The scheme is expected to cover all rural families after expected electrification of all villages by December end this year. The scheme was listed on the agenda of Cabinet meeting held earlier last week. Centre has asked states to prepare electrification projects which would be discussed and approved for release of funds under the scheme. The government has been working hard to electrify all villages in the country and wants to achieve 24X7 power for all by 2019. Prime Minister will also formally inaugurate ONGC’s new corporate office that was renamed Pandit Deendayal Upadhyaya Urja Bhawan, from Rajiv Gandhi Urja Bhawan. The…
Post a Comment
Read more
More posts