Showing posts from April 22, 2018
Show all
April 27, 2018
Wuhan meet to boost India-China tiesON APRIL 27, 2018 BY NARESH SAGARLEAVE A COMMENTEDIT With US imposing tariff on Chinese good and counter balance the Chinese trade the shift of next biggest market for China is obviously the neighboring Asian market and the biggest of them is India which has the potential to absorb the trading potential of Chinese next generation innovations and other business opportunities. India is house of billion of trade worth of Chinese goods , today meeting between two great leaders of the great country needs to work on the trade opportunities lay ahead. Prime Minister Narendra Modi’s first ever informal meet with Chinese President Xi Jinping’s is underway at Wuhan’s Hubei Provincial Museum. Both the leaders will be engaged in talks on a wide range of Business and trade macro issues to facilitate trade between two greatest market of the world. Chinese news agency Xinhua in a report said that India-originated Yoga and Indian films have gained large popularity …
Post a Comment
Read more
April 27, 2018 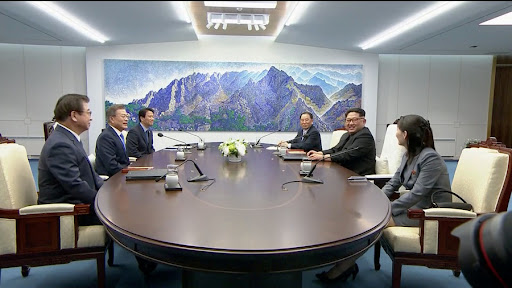 Gina Haspel the acting Dir CBION APRIL 27, 2018 BY NARESH SAGARLEAVE A COMMENTEDIT Gina Haspel took over as acting director of the Central Intelligence Agency on Thursday after Mike Pompeo was confirmed by the Senate and sworn in as the new secretary of state. “It is an honor to lead CIA at this critical time,” Haspel said. She is the first female head of the CIA in the agency’s history. However, she is facing an uphill battle to be confirmed in the Senate as the agency’s permanent director, as veterans from the military and intelligence communities have raised questions about the time she spent overseeing a secret torture site in Thailand. Kim and Moon more closeON APRIL 27, 2018 BY NARESH SAGARLEAVE A COMMENTEDIT North Korean leader Kim Jong-un told his Southern counterpart that he is eager to come to Seoul whenever invited, promising not to interrupt the South’s sleep anymore in an apparent reference to missile tests. South Korean President Moon Jae-in arrived Friday morning in the …
Post a Comment
Read more
April 26, 2018
PGTI announces return of Feeder Tour after a gap of four years
Six events with prize purse of Rs. 8 lakh each to be staged this season
New Delhi, April 26, 2018: The Professional Golf Tour of India (PGTI) has announced the return of its Feeder Tour after a gap of four years. The 2018 PGTI Feeder Tour season will feature six events with a prize purse of Rs. 8 lakh each.
The PGTI Feeder Tour was last staged in 2014 with six events carrying a prize purse of Rs. 6 lakh each. The 2018 season of the Feeder Tour has thus seen an increase of Rs. 12 lakh (33%) in the combined prize purse which now stands at Rs. 48 lakh.
The Feeder Tour events will have a maximum field of 90 players and will be played over three rounds of 18 holes each with the cut being applied after 36 holes. The winner of this year’s Feeder Tour Order of Merit will earn an exemption on the main tour for the 2019 season.
The Feeder Tour season tees off with the first event which will be played from May 23 – 25, 2018, at the BSF Go…
Post a Comment
Read more
April 26, 2018
Social Footprints National CSR Summit & Awards 2018 ON APRIL 20, 2018 BY NARESH SAGARLEAVE A COMMENTEDIT
CMAI Association of India and CIM Global cordially invites you as our VIP delegate in – Social Footprints National CSR Summit & Awards 2018  at Committee Room – D  Vigyan Bhawan, Annexe, New Delhi
27th April 2018, 09.00 AM Onwards
The Summit will be graced by:- ·         Hon’ble Shri Shekhar Dutt, Ex. Governor of Chhattisgarh State, Deputy National Security Advisor of India, Defense Secretary of India ·         Hon’ble Shri Arvind Chawla, Deputy Director General [DDG(AS)], Ministry of Communciation, Department of Telecommunication ·         Hon’ble Shri R. K. Pathak, Deputy Director General [DDG(IC)], Ministry of Communciation, Department of Telecommunication ·         Hon’ble Dr. Manpreet Singh Manna, Director of AICTE & Director (PMSSS & SWAYAM). ·         Hon’ble Dr. Ashutosh Karnatak, Director Projects, Gas Authority of India Limited (GAIL) ·         Hon’ble Shri Ashut…
Post a Comment
Read more
More posts