Israeli Foreign Minister Avigdor Lieberman has resigned after prosecutors decided to charge him with breach of trust. Mr Lieberman has also resigned as Deputy Prime Minister and said he would fight to clear his name of the charges.
The case against him relates to a financial scandal dating back more than a decade. His resignation comes five weeks before Israel’s general election.
He also said he would waive his parliamentary immunity and suggested he hoped to settle the case before the elections, due on 22 January, allowing him to stand as a candidate as planned.
Mr Lieberman is the leader of Yisrael Beitenu, the second largest party in Prime Minister Benjamin Netanyahu’s Likud-led coalition government.

Shooting in Connecticut kills 27 peopleDecember 15, 2012
Ryan Lanza aged 20Years with gun in a Newtown’s city Connecticut kindergarten killed 27 people, including 20 children and his mother, before turning the gun on himself.The shooter in act of firing indisciminately at students and staff left the Connecticut city of Newton shocked. The incident occurred at the Sandy Hook Elementary School in Newtown city of Connecticut state.
Incident took place at Sandy Hook Elementary School,of 600 children a kindergarten,at about 9:30 a.m.Teachers acted diligently and moved their students away from doors and windows. Another teacher locked her students in a closet, act parents said saved their children’s lives, in another class,a teacher when heard two blasts,ordered students into a corner. The principal, vice principal and school psychologist heard the noise and stepped into the hall to investigate in process principal and psychologist  were found dead and vice principal crawled …
Post a Comment
Read more
December 15, 2012
The Bandits beat The Avengers in Touché Golf League 2012 Grand Finaleby sagarmedia 15th December, Bangkok:  Hyderabadi Bandits fought hard  to clinch the title of Touché Golf League 2012 at the Lotus Valley Golf Resort in Bangkok. Bandits won five out of eight matches from Kolkata’s The Avengers gang in match play format in the gladiator round of TGL.
Shashidhar Reddy and Ashwani Kumar Reddy were the top line golfers of the winning gang who won all four matches against their opponents Sunny C. Uthup and Siddharth Rai of The Avengers. Sridhar Reddy of The Bandits was 3 up against Aditya Khaitan of The Avengers while former India cricketer Venkatpathy Raju from Hyderabad also added 3 points to the total tally after winning against Sanjeev Sood.After a hard battle between Bandit’s Rajeev Pandey and  Avengers’ Pratul S. Rawat, Pandey closed the round by staying 2 up. Former Asian Games gold medalist Lakshman Singh of Avengers was the only one who lived upto his gang’s expectatio…
Post a Comment
Read more
December 14, 2012
“WAKE UP WALK” in major cities from 20th to herald ‘national movement against assaults on women’   Eminent public figures, sports and film icons likely to join             "Your daughter could be the next to be molested. You could be the next father/brother  to die defending your daughter/sister's honour,” warn Walkathlon organisers  Chandigarh, Dec.14: In a bold initiative to stop assaults on women in the country, the well-known Patiala-based NGO, Punjab Today Foundation, this afternoon announced the start of a major nation-wide awareness  movement against what it called the "collective guilt of society" against girls and women., The movement would be flagged off with a ‘WAKE UP WALK (Conscience Walk)  on Dec. 20, 2012 to coincide with the International Day for Human Solidarity. The walk will start  after performing ARDAS at the Holy precincts of Sri Darbar Sahib at Amritsar and  would travel through all districts of Punjab and later reach the national Capital for the…
Post a Comment
Read more
December 14, 2012
AirAsia– Asia’s most profitable low-cost carrier secures another 100 Airbus A320 orders in LondonAsia’s largest low-cost carrier accelerates growth in Asia with total record aircraft order now totals 475 narrow-bodies, additional delivery slots until 2021
BROUGHTON, 13 DEC 2012 –Asia’s largest low-cost carrier confirmed another 100 Airbus A320 which further acknowledges its dominance in Asia to have a record 475 narrow bodies on order with Airbus. This such order is part of the AirAsia Group’s regional strategy to continue placing the airline ahead of competition regionally with its extensive growth through new routes, added frequencies and remain the most profitable low cost carrier in Asia.
The 100 Airbus A320s ordered consist of 36 A320s with the Current Engine Option (CEO) and 64 A320s with the New Engine Option (NEO)to accelerate its growth in its core markets Malaysia, Thailand & Indonesia followed by its new markets Japan and the Philippines.
The order was announced during a v…
Post a Comment
Read more
December 13, 2012
IIPM’S FEST - AMAZE 2012 ENDS WITH A BIG BANG… India’s Liveliest & Biggest B-School fest witnesses a participation of over 188 colleges! New Delhi - 13thDecember 2012:Three-day long festivities at IIPM concluded with a big bang in New Delhi yesterday. The Indian Institute of Planning & Management’s (IIPM) Annual cultural fest - AMAZE 2012 witnessed a participation of over 188 colleges from Delhi & NCR. Speaking on the occasion Ms Rajita Chaudhari, Dean, IIPM, Centre for Higher Education"Every year the theme of Amaze is different. The theme is selected keeping in mind the area that interest the youth. Last year the theme was SACK - Students Against Corruption and Kick Backs. This year we thought we should focus on the abilities of the youth to go beyond boundaries and think unconventionally so the theme was ‘Free Your Mind’, which has many interpretations and originates from IIPM's ideology ‘Dare to Think Beyond’. The theme was followed in all the competitions, like t…
Post a Comment
Read more
December 12, 2012
Post a Comment
Read more
December 12, 2012 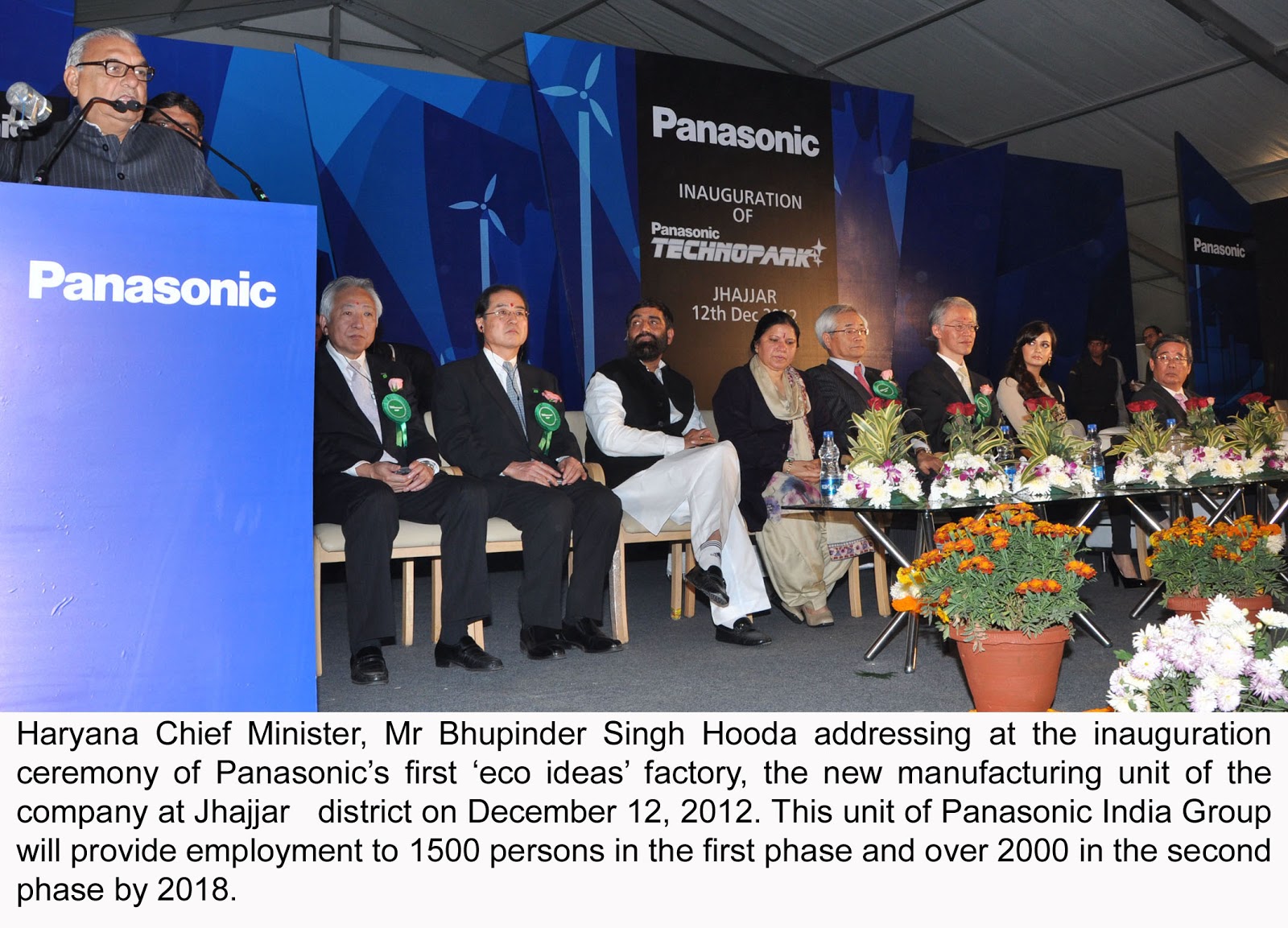 Panasonic strengthens foothold in India to Invest 200 million US$ Panasonic strengthens foothold in India:
Inaugurates new manufacturing unit – Panasonic ‘eco ideas’ Factory ·Panasonic’s first ‘eco ideas’ Factory in India, spread across 76 acres, inaugurated by Haryana Chief Minister, Bhupinder Singh Hooda ·Investment of 200 million USD  from 2010 to 2015 ·Provide employment to 1,500 people in the first phase and over 2,000 in the second, by 2018 12th December 2012, Jhajjar, Haryana, India: Panasonic India, today announced the expansion of its presence in India with the opening of its first model ‘eco ideas’ Factory in India. This is the company’s latest initiative to showcase best practices in sustainable manufacturing and raise level of eco consciousness in the community through outreach activities. With the opening of this manufacturing unit in India, Panasonic reiterated how localization is key for the company’s growth and its commitment in India. This factory promises no…
Post a Comment
Read more
December 10, 2012

President Victor Yanukovich visiting India
India start his tour from  Sunday evening for a four-day state visit, in his sojourn the two countries  agree to raise bilateral cooperation ad to strengthen comprehensive partnership.India and Ukraine today signed five agreements to enhance cooperation including in areas of defence, Nuclear, Science and Technology and also to remove barriers in trade and commerce.

The agreements were signed after delegation level talks between visiting Ukraine President Victor Yanukovich and Prime Minister Manmohnan Singh at the Hyderabad House in New Delhi.The pacts also include a Memorandum of understanding between the Atomic Energy Regulatory Board of India and the Ukranian Nuclear regulator for cooperation in nuclear safety, construction design, operation and nuclear waste management.

Mr. Yanukovich also held talks with External Affairs Minister Salman Khurshid on matter of mutual interest to both countries
Post a Comment
Read more
December 10, 2012
VChangeU wins eNGO Challenge 2012 Award for Organizational Efficiency. Received award from Mr. Munaf Hakim - Chairman of State Minority Commission, Maharashtra during 9th Manthan Award South Asia & Asia Pacific 2012 on 1st December, 2012 at India Habitat Center, Lodhi Road, New Delhi. VChangeU is a non-profit organization based in Hyderabad helping young people by educating them what tobacco and alcohol really are, how occasional tobacco and alcohol consumption can lead to regular use and then to addiction that can wreak havoc with health and wellbeing of entire family. Through school-based education programs and public information programs on tobacco, alcohol and drugs VChangeU endeavours to keep the young generation away from these activities for lifetime.
The website www.vchangeu.com has been used to reach out to a large section of people and spread awareness and inspiration on the core issues with good compilation of information in the form FAQ, statistics and analytics. A to…
Post a Comment
Read more
December 10, 2012
Abhijit Singh Chadha bags PGTIⳠEmerging Player of the Year title for 2012New Delhi, December 10, 2012: Abhijit Singh Chadha of Chandigarhbagged the Professional Golf Tour of IndiaⳠ(PGTI) Emerging Player ofthe Year title for 2012 after he ended the year with prize moneyearnings of Rs. 17,93,478, in his rookie season as a professional.The tall and lanky Chadha, one of the longest hitters on the tour, hadthe highest prize money earnings among all the rookies in the 2012PGTI season. The 21-year-old Abhijit had 20 starts in the season andmade the cut on 17 occasions. The 2010 Asian Games silver medallistposted his maiden professional win at the Surya Nepal Masters and hadseven other top-10s during the year that helped him finish acreditable 14th on the 2012 Rolex Rankings (PGTI Order of Merit).Pranav Kaul of Delhi finished second in the Emerging Player of theYear race with earnings of Rs. 1,99,181. DelhiⳠBhanu Pratap Singhclaimed third position on the list while Sameer M Shaikh of Pune and…
Post a Comment
Read more
December 10, 2012
RETAIL STAKEHOLDERS TO OBSERVE 12TH DECEMBER  AS COUNTRYWIDE 'SANKALP DIVAS'  Slogan 150 plus 30  v/s Crore 120 will be the carrier of future protest activities The retail stakeholders of the Country will observe forthcoming 12th December as " Sankalp Divas" across the Country to take pledge to continue their nationwide movement against FDI in Retail trade under the umbrella of " Khudra FDI Virodhi Rashtriya Morcha".(KFVRM) The farmers, traders,labourers,hawkers,transporters,consumers, SMEs, self employed groups and other sectors of retail trade will assemble at Gandhi statute in their respective cities and will take a pledge to continue the national movement till next Lok Sabha elections in 2014. Mr. B. C. Bhartia, National President and Mr. Praveen Khandelwal, Secretary General of the Confederation of All India Traders (CAIT) in a joint statement released here today said that the KFVRM has also appealed to all those political parties who have opposed FDI in…
Post a Comment
Read more
More posts