The All India Motor Transport Congress (AIMTC) has called off the proposed strike after its representatives met the Secretary, Road Transport and Highways(RTH) here today. All India Motor Transport Congress has given call to suspend operations of goods transport and transportation services with effect from the midnight of April,1,2013 demanding that various issues affecting transport community are resolved by 30th March,2013. During the Meeting, the Secretary Road Transport and Highways, Shri Vijay Chhibber assured that Ministry appreciates the requests of AIMTC and will take steps to facilitate resolution of issues.

March 30, 2013
Four hundred thousand Syrian refugees sheltering in Lebanon – UN  UN is aiding nearly 400,000 Syrians across Lebanon, according to a new report published Friday. It was projected there would be over 500,000 refugees in Lebanon by the summer, but the current influx of people is outpacing estimates, local media said. The number of refugees waiting to register has increased to 145,524, and officials estimate there are between 200,000 and 500,000 more unaided refugees.Media agencies Posted 2 minutes ago by Naresh Kumar Sagar 0 Add a comment Mar 30 Pakistani Taliban claims Peshawar attack Pakistani Taliban claims Peshawar attack that killed 10 near US Consulate.
The Pakistani Taliban has claimed responsibility for an explosion near the US Consulate in Peshawar on Friday. At least 10 people were killed and 31 injured in the blast, police said. A suicide bomber blew himself up near a Frontier Constabulary (FC) convoy in the city’s security area, by a mili…
Post a Comment
Read more
March 29, 2013
India and Liechtenstein Sign TIEA March 29, 2013 India and Liechtenstein Sign Tax Information Exchange Agreement (TIEA)
India and Liechtenstein have signed a Tax Information Exchange Agreement (TIEA) today at Bern, Switzerland. The Agreement was signed by Ms Chitra Narayanan, Indian Ambassador in Switzerland from Indian side and Madame Doris Frick, Ambassador of Liechtenstein in Switzerland on behalf of Liechtenstein.
Salient features of the agreement (TIEA) with Liechtenstein are:
• It is based on international standard of transparency and exchange of information.
• Information must be foreseeable relevant to the administration and enforcement of the domestic laws of the Contracting Parties concerning taxes covered by the agreement.
• There is a specific provision that the requested Party shall use its information gathering measures to obtain the requested information even though that Party may not need such information for its own tax purposes.
• The…
Post a Comment
Read more

This week, Ellen Gustafson and I are incredibly excited to share that Food Tank: The Food Think Tank(FAO) will be partnering over the next two years with the U.N. Food and Agriculture Organization to highlight the important role family farmers play in improving food security, alleviating poverty, enhancing ecoystem services, improving gender equity, creating opportunities for youth, and a whole range of other indicators. We're honored and thrilled to be involved in this important project and will look forward to your suggestions on groups we should highlight in Asia, Latin America, North America, ans sub-Saharan Africa.

“Family farmers” can be defined as producers who make most of their living by farming, have limited access to land and other resources, who work with family members, and where the head of the household is directly involved in production, not just management of the farm.

The World Bank reports that a one percent increase in GDP in the agric…
Post a Comment
Read more
March 29, 2013

Naresh: Syria is in a state of crisis

Naresh:
Syria is in a state of crisis. More than 70,000 people have been killed—over 3,700 are children—since the conflict started two years ago.
President Barack Obama made stopping mass atrocities a priority and a "core national security interest.” Yet U.S. efforts to slow or stop the crisis in Syria—diplomacy and sanctions against the regime, primarily—have had little effect. We need a new approach: the United States must cut off the supply chains that provide Assad the resources his regime needs to commit atrocities. This includes weapons, troops, and access to money provided by Iran and Russia, among many other actors.
Urge President Barack Obama to stop the supply chain to Syrian atrocities!
We have been tracking Assad’s supply chains since the conflict spiraled and found that the United States is well positioned to disrupt it. Secretary of State John Kerry visited Iraq recently and  told Prime Minister Nuri Kamal al-Mali…
Post a Comment
Read more
March 28, 2013 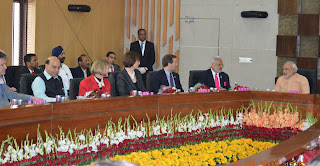 US INVITE TO CM NARENDER MODI : JOLLY
Ahmedabad, 28th March 2013 :  Senior US Congressman visiting India & State of Gujarat today met Chief Minister Narendra Modi at his residence at Gandhi Nagar . US Congressman Mr Aaron Schock Leader of Delegation from State of Illinois along with Mrs. Cathy McMorris Rodgers from State of Washington and Mrs. Cynthia M. Lumis from the State of Wyoming along with a 7 member US business leaders delegation led by Chicago Punjabi NRI Mr Shalabh Kumar and BJP Overseas Affairs leader Mr Vijay Jolly attended the two and half hours long meeting. The US Congressman extended an invitation to Gujarat Chief Minister Mr Narendra Modi to visit United States of America soon. The C.M accepted their invite promptly and smilingly. The issue of visa was never discussed in the meeting. It is important to state that in recent years, this is the highest point of contact between the US elected Officials and the Chief Minister of Gujarat stated OFBJP leader Mr Jolly.…
Post a Comment
Read more
March 27, 2013
Terra Motors plan Electric car for Philippines Terra Motors plan to manufacture an electric car for Philippines thus to give firm competition to the Chinese in this segment of auto sector. A venture firm in Tokyo is eying the emerging economies in Southeast Asia. It has unveiled a new three-wheeled electric vehicle, mainly for use as a taxi in the region.

Terra Motors developed the six seat-rs  vehicle is about three -meters in length . A driver's seat followed by  passenger seats lined on both sides. Company authorities say the vehicle can run fifty kms on a two hour charge with a maximum speed of fifty kilometers per hour.

Company plan to manufacture the vehicles in the Philippines and sell them later this year for about 6,300 dollars.Terra Motors hopes to meet the country's expected demand for three-wheel electric taxis. The Philippine government plans to introduce 100,000 such vehicles by 2016 to help reduce air pollution.

PM: Kudankulam-I will be operational next month
Putin Russian president, keen for his nuclear technology to be spread across North and southern hemisphere thus looks for his project start up with comforts for more can be taken up the  line ups.

Quoting my(Naresh Kumar Sagar) opinion on substance of energy,Energy hot pot subject for Indians, is necessity in fast pace world economy needs everyone's attention. Energy is at crossroad to change its form in many forms, once this energy takes its commoner form it will merciless on the heavy industry, total economy to get into next orbit of minute particles or now known as nano tech.

Naresh Kumar Sagar further adds,"What are the alternates which can bring the fast turn around are simpler form of energy from plants,roots,herbs,hydrocarbons,Solar,bio fuel, Wind,Gases,H,Oxy Nitrogen, Oil and Cakes ,Sewer with modifications and converging chemistry and physics to give them space with electrons.
Preparation of solid fuel fr…
Post a Comment
Read more
March 27, 2013 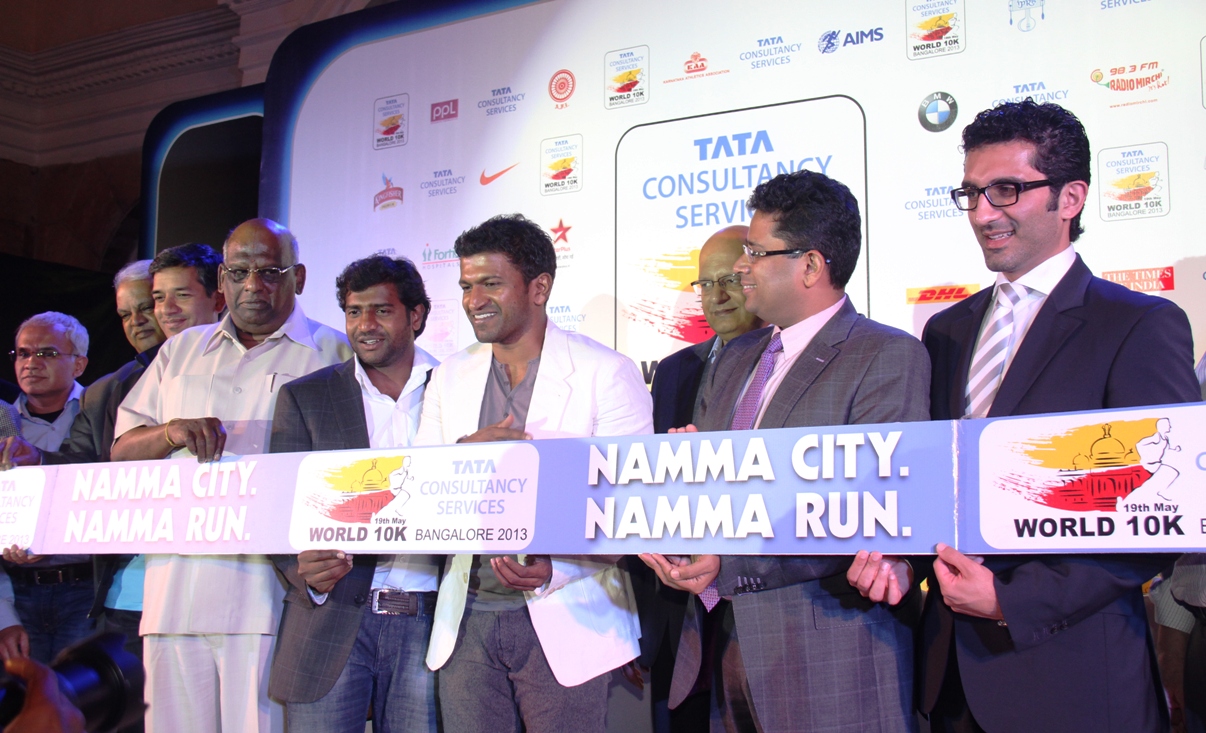 Bangalore’s citizens will Run For Their City in the TCS World 10K Bangalore
In excess of 24,000 people are expected to participate in the 8 events on race day, when the TCS World 10K Bangalore 2013 is flagged off from the Sree Kanteerava Stadium on May 19 and it promises to be the biggest and best as yet.
A strategic tie-up with one of the world’s leading elite athlete management agencies, race categories to encourage the serious runners from the corporate world as well as colleges and universities, course record bonuses and many novel initiatives to enhance the running experience of every participant will herald the TCS World 10K Bangalore 2013.
These initiatives were announced by Mr. N. Ganapathy Subramaniam – Exec. Vice President & Global Head of Emerging Businesses, along with Event Partners at a grand launch press conference held at Regency I in the ITC, Windsor Bengaluru, the Hospitality Partner to the event on Monday. The favourite of Karnataka’s masses, Superstar Puneet Rajku…
Post a Comment
Read more
March 27, 2013

The Indian Direct Selling Industry Annual Survey 2011-12
The PHD Research Bureau in collaboration with Indian Direct Selling Association published the Annual Survey 2011-12 for the Indian direct selling industry and the report was released on March 22, 2013 at Hotel Oberoi, New Delhiby Ms. Ganga Murthy, Principal Advisor, Department of Consumer Affairs, Government of India.
Summary of the Annual Survey 2011-12 findings:
The Indian direct selling industry has been beating the economic slowdown, notching up remarkable growth over the years and has been expanding its horizons in India as a rapidly emerging alternate distribution channel. The direct selling industry has grown at 22% during 2011-12, with its sales revenue expanding from INR 52,294 million in 2010-11 to INR 63,851 million in 2011-12. The robust growth in the segment has been contributed by 22.5% growth in the organised and 17.7% growth in the unorganized segments of the industry during 2011-12. The industry grew from INR 33,…
Post a Comment
Read more
More posts