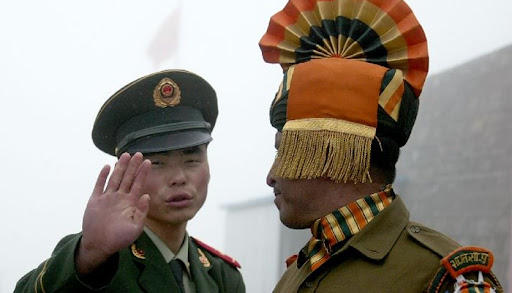 A BORDER STANDOFF BETWEEN CHINESE AND INDIAN TROOPSJULY 27, 2017LEAVE A COMMENTON A BORDER STANDOFF BETWEEN CHINESE AND INDIAN TROOPS Chinese and Indian soldiers stand guard at the Nathu La border crossing in India’s northeastern Sikkim state, near the disputed Doklam territory. Photo: AFP  A border standoff between Chinese and Indian troops on a remote Himalayan plateau has heightened long-standing tensions while ensnaring a tiny kingdom, Bhutan, between the two nuclear-armed powers. The row has festered for more than a month as India and China refuse to back down in the distant but strategically key territory, reflecting the historic mistrust between the Asian giants. The area is disputed between China and Bhutan but India’s decision to jump into the fray reflects its concerns about Beijing’s growing military might and ambitions in the region, analysts say. The border trouble began in mid-June when Chinese soldiers started to extend a road through the Doklam territory — known as “Don…
Post a Comment
Read more
More posts