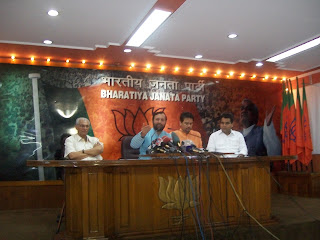 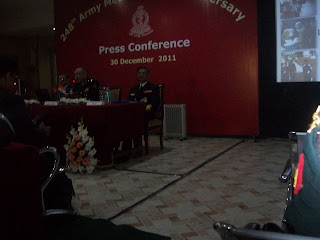 AMC on modernization spree Rs 8100 Cr
Friday, December 30, 2011
AMC on modernization spree at Estimated Cost Rs 8100 Cr Nksagar-Sagar Media Inc: New Delhi;
Army Medical Corps, today said that modernization of 42 Army Hospitals are on the agenda to cater to meet the demands of the armed forces. Holding briefing reporters on the occasion of its 248th Anniversary, the Director General of Armed Forces Medical Services Lt. General H. L Kakria explained Corps professionalism at its best and is working for comprehensive medical faculties not only for armed forces but for Border Guards,Coastal Guards,Ex servicemen, and for people at remote places.DG Lt General  further added the work of modernization will be undertaken at an estimated cost of 8100 crore rupees. He said that government has approved induction of over 10000 doctors to enhance the strength of hospitals so that more patients can be treated. He said that at present the strength of Doctors in Army Corps is about 6000 ou…
Post a Comment
Read more

Annual Survey of Industries 2009-10 and address the media

Prof. T.C.A. will release the

Results of Annual Survey of Industries 2009-10 and address the media.

December 30, 2011
Lokpal Bill yet again failed to get Parliament's nod when Rajya Sabha was on. Wednesday night Rajya Sabha adjourned sine die abruptly amid high drama and Opposition accusing the the government of running away from a vote because it was in a minority.The Trinamool Congress, a UPA constituent which had moved a slew of amendments and gave the government torrid time when it vowed to vote against the bill, called the adjournment an "orchestrated chaos", almost echoing the Opposition view that it was "choreographed drama".
Post a Comment
Read more

India and Japan are forging ahead with collaboration on political, security and economic issues, besides regional cooperation, visiting Prime Minister Yoshihiko Noda said on Wednesday.

"I am convinced that we need to strengthen the partnership. India and Japan are stepping up their cooperation in areas like political, security and economic fields and also regional areas," Noda said here at a luncheon meeting with Indian chambers CII, Ficci and Assocham.
The Comprehensive Free Trade Agreement between the two countries that was operationalised in August will further enhance the India-Japan economic relationship, he said.
Noda added that about 420 Japanese companies present in India have created over 1.50 lakh jobs in the country.Japanese government has committed USD 4.5 billion for the Delhi-Mumbai Industrial Corridor (DMIC) project.
The project is aimed at creating world-class industrial infrastructure along the Delhi-Mumbai Rail Freight Corridor, which is under im…
Post a Comment
Read more

CBI not in net of Ombudsman: PM

December 27, 2011
Prime Minister Manmohan Singh rejected demands for bringing CBI under the perview of the anti graft ombudsman.Dr Singh warned that no entity should be created inconsistent with the country's constitutional framework.
Intervening in the debate on Lokpal and Lokayukta bill, Singh dismissed opposition to the provision of setting up of Lokayuktas in the state, saying federalism cannot be an impediment in the war against corruption.
The Govt has denied violating constitution and asserts that enactment of Lokayuktas under central law is in pursuance of UN convention against corruption.
"There are some very special moments in the life of a nation. This is one such moment. The nation awaits with bated breath how the collective wisdom of this House will be reflected in the vote at the end of the debate on the Lokpal and Lokayuktas Bill, 2011," he said.
Noting that the broad provisions of this Bill have been vigorously debated both in the public domain and by political parties, S…
Post a Comment
Read more

December 25, 2011
Baisoya wins Goodricke East India, Chikka is beaten
25th December, Kolkata: Delhi’s Honey Baisoya showed his swing in Rory Mclroy’s style as he became the youngest winner of the 22nd edition of Goodricke East India Amateur Golf Championship at the Royal Calcutta Golf Club, Kolkata. The 15-year-old Baisoya, sent the opponent, The No.1 Amateur, S. Chikkarangappa home, wrapping up the match on the 34th green to win 3 and 2. Both of them had to play 2 rounds of 36 holes as it was the final day of the tournament.
Baisoya secured a winning start after making birdies on 1st, 4th, 5th, 9th, 12th and 15th in the first round of 18 holes where both Baisoya and Chikka halved 11 holes. Though, Chikka won 3 matches on 7th, 11th and 14th, Baisoya was 2-up after the first round.
In the beginning of second round, Baisoya again took the early lead after making a birdie on the 1st to go 3-up where Chikka’s 2nd shot went 10 yards off the green and he made a par. Chikka, who was suffering with the pain in h…
Post a Comment
Read more
More posts