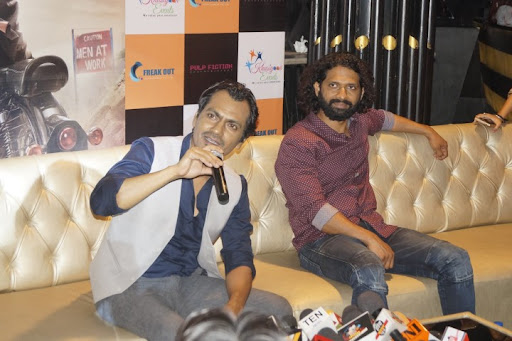 NAWAZUDDIN PROMOTED “BABUMOSHAI BANDOOKBAAZ” IN DELHI ALONG WITH THE CAST!AUGUST 19, 2017LEAVE A COMMENTON NAWAZUDDIN PROMOTED “BABUMOSHAI BANDOOKBAAZ” IN DELHI ALONG WITH THE CAST!
The stunning actor of Bollywood Industry Nawazuddin Siddiqui promoted his upcoming action thriller film Babumoshai Bandookbaaz out here in Delhi. Along with him the other cast of the movie Bidita Bag, Shraddha Das, Jatin Goswami and producer Ashmith Kunder were also present to grace the promotions by their presence. Whereas, while interacting with media at the press conference held in The Royal Plaza Hotel, Nawaz and the cast shared their experiences and uniqueness of the movie. While asking Nawaz about the movie and specialty of the character he stated, “The character of the movie is special and unique, he is out of all the social and naoral values, he carry a weird humor.” About the censor certification, Nawaz seemed bit relaxed, he said, “The movie is entirely original, Censor have given just 4 to 5 cut…
Post a Comment
Read more
August 18, 2017

DEAR SAGAR MEDIA INC,  A 16-YEAR-OLD JUNAID DIEDAUGUST 18, 2017LEAVE A COMMENTON   DEAR SAGAR MEDIA INC,  A 16-YEAR-OLD JUNAID DIED Dear Sagar Media Inc, A 16-year-old Junaid died in his brother’s lap on a railway platform. He was beaten to death by a mob, and was called a “beef-eater” and an “anti-national”. I am a proud Indian, and every time I read about a new case of mob lynching, my head hangs in shame. Just recently, a 60-year-old Dalit woman was lynched because villagers suspected that she was a ‘witch’ who was chopping of women’s hair. Hindus, Dalits, Africans, students from the North-East have all been lynched over rumours in the past year. Shockingly, there is no law against lynchings and mob vigilantism in India. Perpetrators are arrested on vague charges and then let out on bail. In the last two months, 3 people accused of lynching have been released on bail. Clearly, we need a law that protects all Indians from vigilante mob violence. Sagar Media Inc, sign my petition and…
Post a Comment
Read more
More posts