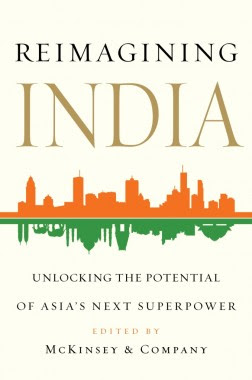 Reimagining India An event at The Asia Society

India is "rising" and "shining" — but is it doing so as quickly or as brightly as it should? There is mounting frustration, in India and overseas, that the burst of economic liberalization of the 1990s and the rapid growth in the first decade of this century have given way to deadlock and complacency. But over the next decade, India has an opportunity to show the rest of the developing world how open, democratic societies can achieve growth and prosperity. What is India's true potential? And what can be done to unlock it?
McKinsey’s Reimagining India: Unlocking the Potential of Asia's Next Superpower, is a seminal new book with an all-star cast of contributors, including CNN’s Fareed Zakaria, Mukesh Ambani, Bill Gates, Eric Schmidt, Muhtar Kent, former Asia Society president…
Post a Comment
Read more
November 08, 2013

Estonia, Russia, Finland to forge golden tourism triangle8112013  Estonia, Russia and Finland are planning to forge a golden tourism triangle as representatives from the three countries met at the first conference on tourism cooperation in Estonia’s northeastern city of Narva on Wednesday. The conference, running from Nov. 6 to 8, was attended by representatives of St Petersburg (Russia), South Karelia (Finland) and Ida-Viru county (Estonia), according to the report of Estonian Public Broadcasting (ERR). The conference was jointly organized by the three countries with the aim to develop tourism in Northeast Estonia and to promote cooperation. Edit : EditComments : Leave a Comment »Categories : Uncategorized Nirupama Rao bids farewell to her diplomatic career8112013 Nirupama Rao, Indian envoy to the US, bid farewell to her career of diplomacy, as members of the American diplomatic corps and her counterparts from countries like China and Brazil gathered at a reception hosted in her honour…
Post a Comment
Read more
More posts