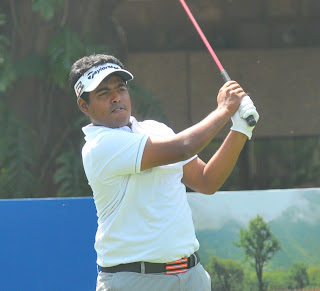 Colombo, April 18, 2013: Local favourite Mithun Perera shot a brilliant seven-under-64 to open up a three shot advantage in round three of the Sri Lanka Ports Authority Open 2013 at the Royal Colombo Golf Club. Colombo-based Perera now has a total score of 13-under-200. Bangladesh  Zamal Hossain Mollah is placed second with a total of 10-under-203.

Mithun Perera (69-67-64), who shot a bogey-free round on Thursday, hit a purple patch with three consecutive birdies from the fifth through the seventh and thus made the turn at three-under. On the back nine, Mithun had another golden run of three consecutive birdies from the 10th through the 12th. The three-time winner on the PGTI made his last birdie of the day on the 17th to end up with a blemish-free round of 64.

It was great to have a bogey-free round today. A seven-under- 64 is obviously a good score, but it could have been better as I had a few near misses. The course is in really good condition and greens are playing better than previous rounds. I think local knowledge helped me a lot, particularly with the speed of the greens. I hope I can continue to exploit the local conditions and capitalize on the three-shot lead,said Perera, who climbed from overnight tied sixth to the top of the leaderboard.

Md Zamal Hossain Mollah (70-64-69) stayed within striking distance of Mithun with a two-under-69 that gave him a cumulative score of 10-under. Zamal started with a bogey on the first but then birdied holes 4, 5, 7, 10 and 11. Back-to-back bogeys on 14, 16 and 17 pushed him back but he sank another close putt on 18thto finish his round with a birdie.

Overnight leader Anura Rohana had a tough day on the greens and came up with a one-over-72 to lie in third place at nine-under-204. hitting was decent but putting let me down. I could not convert some close putts and was a little unfortunate on the eighth where my 20-foot putt came to rest on the edge of the hole. I hope for the best tomorrow,said Anura.

Rashid Khan and Chiragh Kumar were the highest-ranked Indians after round three. Both the golfers are five shots behind the leader at eight-under-205 in tied fourth.