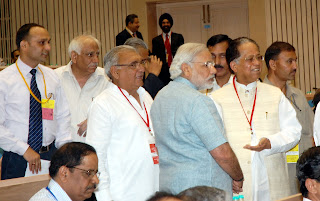 5May 2012:Surat/New Delhi
On Sunday for people migrated from Bihar-Jharkhand and Andhra Pradesh and residing in Surat, the Chief Minister NarendraModi will preside over their two mega congregations.
Shri.Modi will attend Bihar Centenary Celebration as well as TeluguMahaSammelanthat will be held in city, in the evening.

Bihar ShatabdiMahotsav, that will be held at B.R.C. ground,Udhna, organized by Samasta Bihar-Jharkhand Samaj Trust, will witness a grand felicitation of 26 dignitaries from Bihar,Jharkhand and Gujarat.

NarendraModi, will share dais with Shankracharya of Sri KanchKamkotiPith SriSriJayendraSaraswati at a Telugu MahaSammelan that is to be held at Parbat village area on the outskirt of the City, after attending the Bihar Celebration. Ministers Narottambhai Patel, Mangubhai Patel, RanjitbhaiGilitwala, MPs, MLAs from Surat-Navsari and city Mayor will be the special guests on the occasion.

tips said…
Emerging Jharkhand Times Impact Awards is initiative of advertising agencies of Ranchi and Event Management Companies who try to give a tribute those people who think, work and gathered information for Jharkhand and its people.

information about jharkhand
Tuesday, May 08, 2012