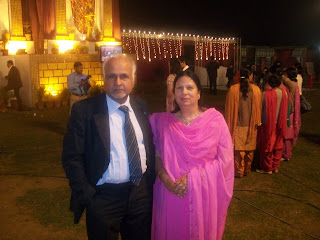 Navratna Ahmedabad to square off against Puravankara Bangalore in the final,Vikrant Chopra & Anirban Lahiri shine on day three, Jyoti prevails over Jeev in historic clash.

Vikrant Chopra won the first match for the Ahmedabad team when he trounced the more fancied Gaganjeet Bhullar by a 4 & 3 margin. Chopra got off to a tremendous start as he drove the green on the par-4 first hole to make an eagle. After bagging the first hole he went on to win the second and third as well to go three ahead. Vikrant sank a 20-feet putt for birdie on the third.
The 31-year-old Chopra, who is known for his booming drives, thereafter lost the fourth, seventh and ninth holes to Bhullar but won the fifth and eighth to stay two up at the turn. Vikrant secured his second eagle of the day on the par-five 11th and followed that up with a birdie on the 12th to build a substantial lead of four. Chopra won the encounter after both the players halved the 15th hole.
Vikrant, ranked 10th on the PGTI’s Rolex Rankings in 2011, said, “I had a brilliant start today and did not let go of the advantage. I shot a seven under over 15 holes thanks to some excellent hitting. I’ve played solid golf this week and am confident of doing well in the final as well.”
Mithun Perera made it 2-0 for Ahmedabad after he emerged triumphant against Harendra Gupta with a 2 UP score. Perera thus sealed a berth in the final for his team. Mithun won the first, 13th, 16th and 18th holes and lost the seventh and 10th.
Sujjan Singh gave Chandigarh their lone victory against Ahmedabad after he beat Vinod Kumar 2 & 1.In the other semi-final, SSP Chowrasia defeated Manav Jaini 3 & 2 to give Take Chennai a 1-0 lead over Puravankara Bangalore. Jaini, however, achieved the distinction of making a hole-in-one on the eighth.
Puravankara Bangalore then came back into the contest to the delight of the home fans as 25-year-old Abhishek Jha overwhelmed the veteran Gaurav Ghei with a score-line of 2 UP. Jha was one behind till the 13th as he struggled with his putting. However, Abhishek converted some crucial putts on the last five holes to pocket the 14th, 17th and 18th.
Anirban Lahiri then won the third and decisive match against Anura Rohana with a 2 UP score. Anirban won the first hole and lost the second, third and fourth. The local favourite then rallied with wins on the eighth, ninth and 10th holes. He sank a 15-footer for birdie on the eighth and landed it within a foot of the pin from the fairway bunker for birdie on the 10th.
Lahiri lost the 11th and claimed the 12th and 18th. The two-time Asian Tour winner thus made it two wins against one in favour of Bangalore and took his team to the final.
Lahiri said, “My ball-striking was good today even though my putting was wayward. Jaini’s hole-in-one lifted my spirits and I seemed to play better from there on. I’m quite confident of performing well in the final. I’m also excited about playing in front of my home crowd.”
In the other match-ups on day three, The 3C Delhi overcame Ansal API Lucknow with a 2-1 score-line and AVT Kolkata got the better of Oxford Group West with the same margin.DLF Gurgaon blanked Shubhkamana Noida 3-0 in the encounter for ninth and 10th positions. Playing for Gurgaon, Jyoti Randhawa prevailed 3 & 2 over Jeev Milkha Singh, representing Noida, in their historic clash. Randhawa won the fourth, fifth, ninth and 10th holes while Jeev won the sixth.